The summer of 2001 saw major repairs and improvements being made at our historical museum. The museum barn, built about 1912 at the rear of the museum property, received new "board and batten" wood siding, new vinyl windows, and steel entrance and overhead doors. A concrete base was poured under the front overhang of the barn and old historic bricks were laid within the perimeter to form a porch/patio. Also, a new concrete sidewalk was poured from the barn to the old brick patio behind the house and new underground wiring was installed. The total cost of these renovations was approximately $11,300. We would still like to make some changes to the interior of the barn. We need to make some electrical changes for better lighting, remove some walls, and re-cover the ceiling & the interior of the outside walls to provide a better means to display items. 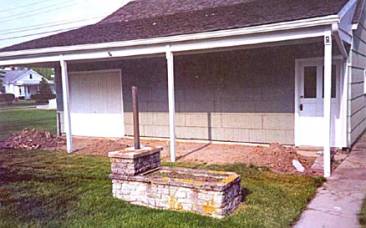 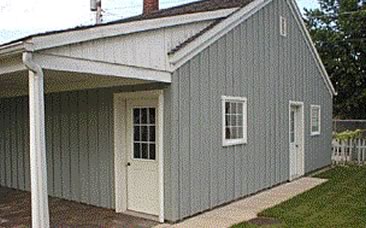 Front of barn before and after renovation. Planter was removed.

North end of barn before and after 2001 renovation.

Also, in 2001, the museum was given a new coat of paint, repairs were made to the windows, and improvements were made to the downspouts & drainage system for a total cost of approximately $3,700. The furnace was also in need of repair, costing over $350.

The rotted siding on the outdoor oven was replaced with different used siding which matched the original and a gravel perimeter was put around all the buildings to make for easier maintenance.

In 1999, with the help of Crown Equipment Corp., we were able to close the old graveled driveway north of the house by excavating the old gravel-hardened dirt and leveling the area with new fill dirt and sod. In December 2001, the three sweet gum trees planted along the north side of the house were moved (also with the help of Crown) out into this area in order to give the trees more room to grow and to create more space between them and the house.

We are proud of what we have accomplished in 2001 and look forward to more improvements in the future. As is always the case, we can only make these improvements after our financial reserves have again been built up through payments of membership dues, donations, and perhaps more money-making projects.