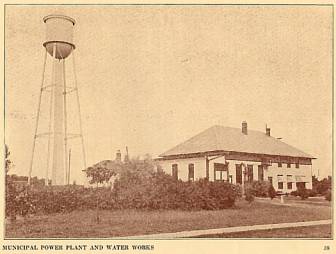 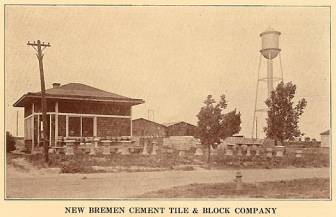 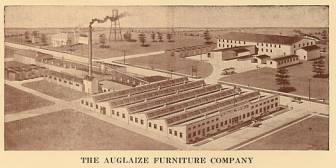 Organized in 1913, or soon after the plant of the old Klanke Furniture Company was totally destroyed by fire.

In recent years the firm has been making novelty furniture. Total sales amount to $125,000 annually in normal times. 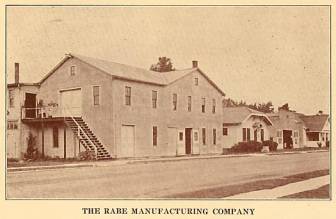 Organized February 1, 1901. The business was founded in 1868 by Wm. Rabe, who conducted it until 1901 when it was incorporated under the name of The Rabe Manufacturing Company

The firm is engaged in woodworking and manufactures doors, sash, window and door frames, interior and exterior trim, and special mill products. Its annual sales approximate $75,000. 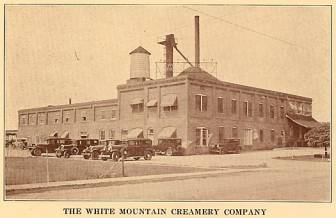 Organized in 1884 to carry on the business built up by Louis Huenke, who made it possible for New Bremen to have the first creamery in northwestern Ohio. Incorporated in 1908.

The firm is engaged in manufacturing and processing butter, milk, ice cream, condensed milk and allied products. Its annual sales reach a total of $2,800,000.

Besides having operated the first creamery, The White Mountain Creamery Company was the first to introduce the hand separator in this part of the state. It also was a pioneer in the pasteurization of milk.

Officers of the company are C.V. Huenke, president, and Harry Komminsk, secretary and treasurer. 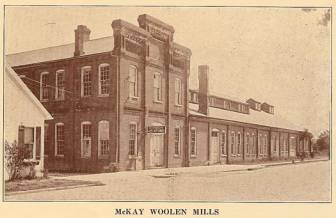 The company operates a textile mill and manufactures knitting and weaving yarns. Its annual sales of woolen and merino yarns approximates $50,000. 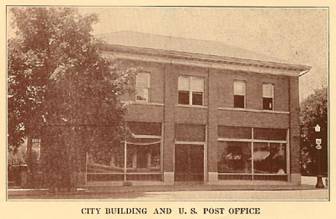 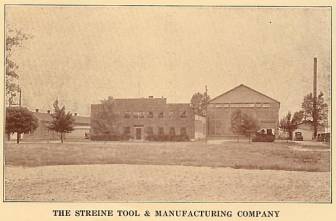 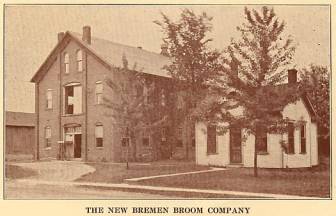 The first plant operated by the company was housed in a two-story iron-clad building known as the Lantern Factory. On August 2, 1898, a deal was made with the Klanke Bros. Furniture Company for the New Bremen Foundry & Machine Company building. The firm took immediate possession of the building and has occupied it ever since. A large warehouse, measuring 40 by 90 feet, and an office building were erected in 1905.

The company manufactures house and factory brooms, and whisk and toy brooms. Its annual sales approximate $50,000. 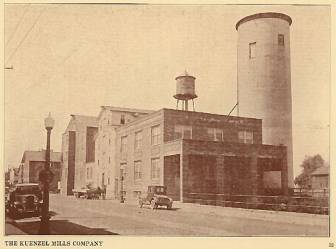 The company operates a Woolen Mill and a Flour Mill. The Woolen Mill produces all-wool bed blankets of quality and an all-wool blanket cloth known to the market as Kuneta Cloth. Its annual production is equivalent to 35,000 pairs of standard double bed blankets, the sales approximating $250,000.

Products of the Flour Mill include an all-purpose family flour under the trade name Gold Lace, a soft winter wheat flour called Gold Star, a cake flour, self-rising biscuit and pancake flours, meals and feeds of all kind. The mill produces about 15,000 barrels of flour annually in addition to its other products, with a total sales value of $80,000. 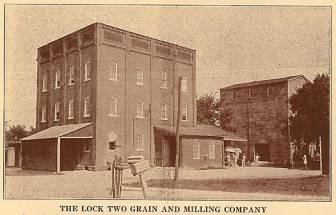 The company operates a flour mill and grain elevator one mile north of New Bremen. Its annual sales of flour, meal and mill feeds total $200,000.

Officers of the company are Herbert Garmhausen, president, and Frank D. Kuenning, secretary and treasurer.