With the old school being torn down this summer, several 1972 NBHS graduates were reminiscing about the good old days. It has been 60 years ago, and this is how we remembered our First Grade in 1960. 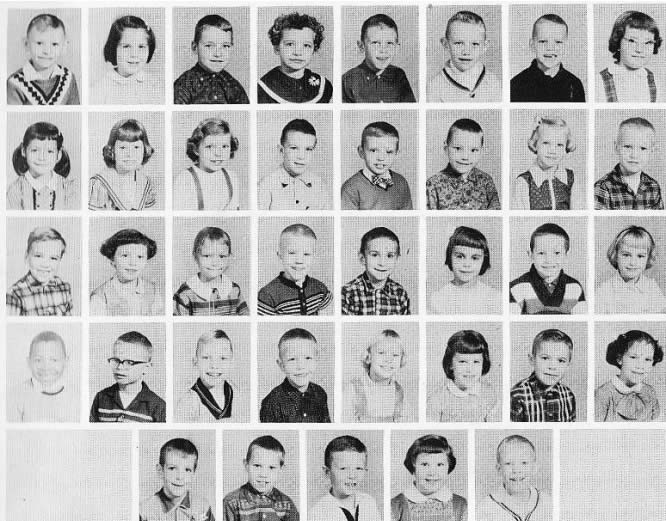 The New Bremen Elementary School on Plum Street was only a couple of years old. Most of us finished a funfilled year of Kindergarten with Mrs. Ann Kuhn as our teacher. We started out First Grade with a total of 73 students divided into two classrooms. Over the years, students moved away, one moved in, along with an addition of a foreign exchange student our senior year. We graduated with a total of 60 students which was average for our school at that time. Popular class names were Deb, Jim, and Sue-there were three of each. The most popular street address for our classmates was Franklin Street.

In 1960, the first-grade classrooms were located in the hallway to the left of the elementary office. There were only four classrooms down that hall, two first grades to the left and two second grades to the right. Mrs. Harlamert and Mrs. Nicely were the first-grade teachers. We remember many sweet, funny, interesting, bizarre, and/or traumatic stories pertaining to that year.

Back then the first day of school was right after Labor Day. A week or so before you would buy school supplies such as pencils, a pink eraser, a very dull scissors, ruler, crayons, paste and something like a Goldenrod tablet. These supplies were carried in your school satchel; a bag carried on the shoulder by a long strap and typically closed by a flap.

Many of the girls would have recently gotten a home permanent or a pixie haircut and the boys a fresh buzz cut over the holiday weekend. Either way, in our opinion no one looked extremely cute…not that our parents didn’t want us to look cute, we assumed it was either the current style or our mothers were too busy to spend a lot of time fixing hair every morning in 1960.

Boys wore button down shirts, pants (no jeans) and either brown or black laced up leather shoes. Girls wore jumpers/skirts/dresses with leather shoes and ankle socks. We all remembered we got one new pair of leather shoes per school year. It didn’t matter if your feet grew or how worn they got, there was no such thing as getting another new pair of shoes during the year. 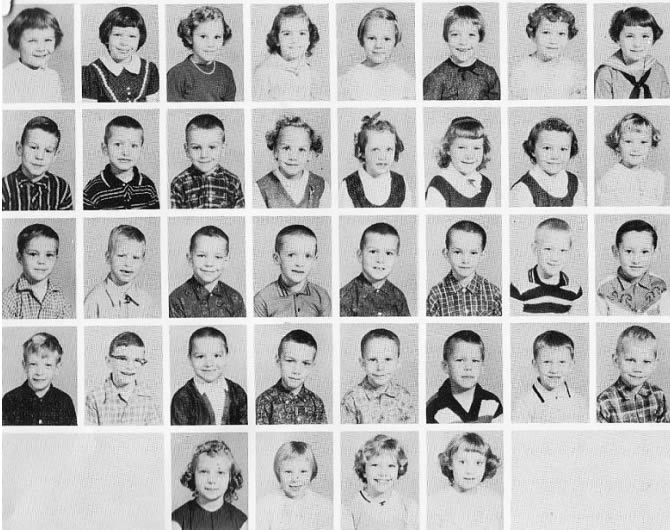 When cold weather arrived, girls would wear pants under their dresses to keep warm during the walk or ride to school and on the playground. (As far as girls wearing pants to school, the girls in our class were finally allowed to wear pants, not jeans, beginning in 1971 the start of our senior year.)

When the school doors opened for the new school year you would immediately be overcome with the “school smell.” It was not a bad smell, just smelled like school and it felt like you were just there yesterday and didn’t even have the summer off. Back then you didn’t know who your teacher was going to be for the year until you got to school on the first day and read the class list posted by the classroom door, either 1A or 1B. After finding your name on the list, did you get the teacher you wanted? Are your best friends in the same class? Finally, after the long summer break those two very important questions in our little minds were answered.

Everyone would then go into their assigned classroom, remove items from their satchel, hang up their satchel/jackets/packed lunches in the lockers on their assigned hook ALWAYS in alphabetical order. (Beginning in Kindergarten, you always knew who was going to be your locker neighbors all the way through your senior year.) The morning announcement over the loudspeaker was one of the first daily rituals followed by reciting the Pledge of Allegiance. (We vaguely remembered reciting the Lord’s Prayer in some of our grades.)

According to our actual handwritten report cards the subjects for first grade were Reading, Spelling, Handwriting, and Arithmetic, along with Music and Art. We really forgot how simple it was back in 1960 first grade! Other than morning and afternoon recesses and lunch, we remained in our classroom all day. The music and art teachers came to our rooms. The class was divided into three groups for reading and during that time the groups not participating had to work on assignments.

The chalkboards were the most important teacher’s aid in regards to instructing and were used all the time for all subjects. Every day after school the chalkboards and the erasers were cleaned. There always seemed to be a lot of chalk dust. Many of us still remember and can sing some of the songs we learned in music class. Our artwork would get taped to the hallway walls or hung throughout our rooms. Physical Education was not listed on our report cards and we are not sure if we had it in first grade. However, we did find a slip of paper from Mrs. Wissman titled Physical Education Report which had to also be signed by a parent. We do remember going to the multi-purpose room and riding on scooters during Phys. Ed. at some point during grade school.

We remember a very large jar of paste in each classroom. When our little individual paste jars would get empty, the teacher would take paste out of the large jar and refill ours. We all remembered standing in the “paste line.” The bookshelves in front of the windows were filled with books, puzzles, and other miscellaneous learning items.

There was always a pencil sharpener bolted down on top of the bookshelves. Typically, we would sharpen our pencils very slowly because you could stare outside the window and take a break from learning. In one of the first-grade classrooms, there was a glass bowl with a little turtle in it on the bookshelf next to the pencil sharpener. It lived for a while and then “something” happened to it. We think one of our classmates squeezed it a little too hard and the teacher flushed it down the toilet. Some of us were very upset about this event and even cried…poor turtle.

Was there punishment for bad behavior? Yes, children were punished if they misbehaved or were accused of misbehaving back then. Typical punishment was sitting in the corner or being sent to the lockers. The lockers had individual push doors, but they were totally open from end to end so you could walk around in them if you were sneaky about it.

If the behavior was very bad you would have to stand out in the hall next to the classroom door for everyone to see you, although very few people would see you because the students in that area did not leave their classrooms. One student would occasionally talk excessively in late morning and wanted to be sent to the lockers because of his/her hunger. This student would then open lunch pails and eat the cookies, etc. Some of us remembered other forms of punishment were administered as well.

Looking back, old playgrounds were dangerous, but we did not know it and certainly didn’t care. There were always lots of cuts and scrapes, broken wrists, arms, and legs since there was no padding under any of the equipment, just stones. Even though you hung on for dear life, one never knew when you would be thrown off a very speedy merry-go-round. The little girls always had to make sure they flipped over bars fast or were able to hold onto their skirts at the same time during all of their activities. On hot days, their legs might get burned going down those shiny silver metal slides. But all in all, we always had so much fun!

Oh, the smell of school lunches! Every class would line up single file and walk to the cafeteria. Since all grades were in the same building, sometimes on the way to the cafeteria we would see high choolers walking out of Industrial Arts, Vo-Ag, or the Band room. We would look them over and thought they were so old, pretty, nice, and/or even scary. 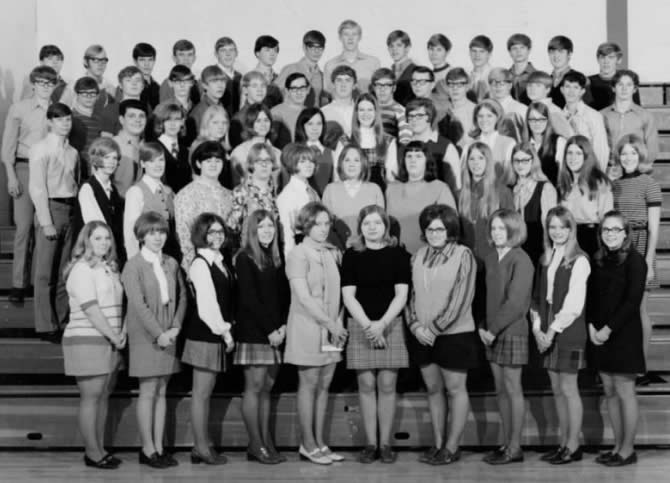 Some of our favorite lunches were Johnny Marzetti, chili soup, peanut butter & jelly sandwiches, cookies, and cakes. Pizza and salads were not offered for lunch back then. Your teacher sat at the end of the cafeteria table and checked to see if EVERYTHING had been at least tasted. There was a lot of moving food around on your plate, and sometimes putting food in your mouth and then going to the restroom to spit it out, especially if it was cooked spinach or succotash.

Another classmate mentioned if you were out of school sick and didn’t have a sibling in school, Mrs. Harlamert would put together the school work you needed to catch up on, then personally deliver it to your house after school and there would always be a treat enclosed, too.

There is so much more we could have written about our first-grade year, but we are going to wrap this up by asking two questions. When you read the above, couldn’t you just smell your old classroom, jump ropes and redrubber balls, pencils, paper, paste, pink erasers, chalk, crayons, floor wax, sweaty kids after recess, cafeteria food smell flowing down the hallway and the School Nurse’s office? And do you remember the sound of children talking, singing, yelling, and screaming during recess and school bells ringing? We really did have a lot of fun during the first grade, especially getting to know classmates we would spend time with over the next twelve years and even beyond graduation. Hopefully, this article will bring back some of your own wonderful New Bremen Elementary School memories as well!

Members... click below to read this article as well as the full version of the October 2020 Towpath. If you still don't have your user name and password for access, email us at info@newbremenhistory.org.