The stained glass windows of New Bremen’s St. Paul Church are filled with Christian emblems and symbols which bring messages from past centuries. Christians struggled through persecution, blood and tears to fight the good fight and win the crown of life. The monograms and symbols are often secret signs or language devised many years ago to safely commune with one another in the fellowship of Christ. We feel a sense of oneness and understanding of the “communion of saints” when we view these symbols.

The window above the east (front) door has a symbol of a sunflower. Sunflowers turn toward the sun as the soul turns to Christ. The sunflower is also a symbol of glory, gratitude and remembrance. 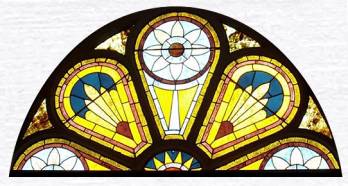 On both sides of the sunflower are the wheat and tares, which symbolize both Christians and non-Christians.

At the bottom we see the sun rise. The sun is a symbol of Christ. The dawn of the sun refers to youth’s relation to the future - the new day that young people may help to usher in.

There are several windows which are quite similar except for the innermost circle. These windows also contain an oval or almond-shaped symbol called the “Vesica Piscis”. It is formed by the intersections of two circles and is used frequently in early Christian art as an emblem of Christ. When displayed vertically it forms the shape of a fish. Early Christians adopted the fish symbol as their own and used it as a secret code to identify themselves to one another.

The Fleur-de-lis is a French term meaning “the flower of the lily” while to others it represented the iris. It is symbolic of the Holy Trinity, the Annunciation, and Mary, Mother of Jesus - the human and divine natures of Jesus Christ. 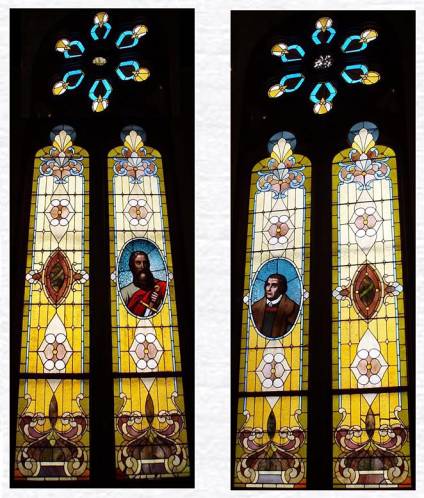 This imagery is drawn from the books of Isaiah and Wisdom when Paul described the Christian in terms of the Roman soldier in dress and equipment. He observed though that the Christian does not enter combat with people but rather combats the spiritual powers of evil. “…Take the helmet of salvation and the sword of the spirit, the word of God”. [Ephesians 6:10-17]

The crown in the center of the top circle of windows is used to symbolize the kingly office of Christ. The Crown of Life refers to eternal life through our Lord Jesus Christ.

Martin Luther is considered the father of Protestant Reformation. Martin Luther was a German who was ex-communicated by the Pope for his beliefs. He wrote a statement of Protestant beliefs and criticisms of the Roman Catholic Church called the Augsburg Confession. This began the Reformation movement which led to the Evangelical Lutheran and Evangelical Reformed churches. The union of the Lutheran and Reformed movements in Germany released several important currents:

It became the center of liberal theological thought.

It developed institutions for the care of the sick, orphans, and the mentally retarded.

It fostered a spirit of radical democracy in both church and political life.

The lily in the center of the top circle of windows signifies annunciation. It refers to the fact that a bulb decaying in the soil produces a new bulb, stem, leaves and flowers - all rising in a glory above the dark soil. The process of death and the release of new life are inseparable, thus signifying the attainment of immortal life though the body perishes. 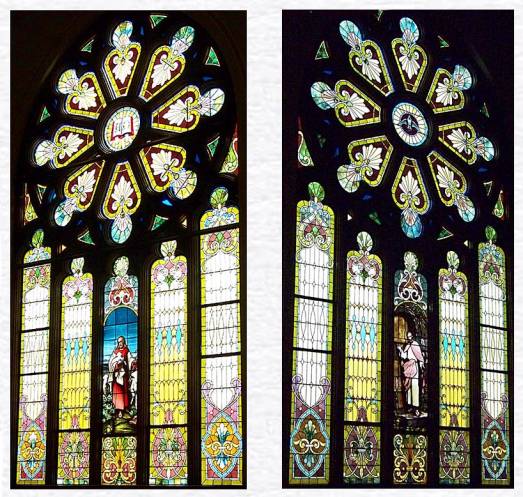 At the top of this window is the Bible. It is the Word of God and is the alpha and the omega, the first and the last, the beginning and the end. The symbol is most clear when there is something to complete a visible connection between these letters and Jesus Christ. Human life can be rich and radiant when the light of Jesus Christ shines through.

“Behold, I stand at the door and knock; if anyone hears my voice and opens the door, I will come in to him and eat with him and him with me.” [Revelations 3:20]

Matthew 7:7 and Luke 11:9 also refer to Jesus knocking at the door. Notice that the door latch is on the inside. Christ will not force himself on us; we must choose to open the door.

At the top of the window is the Dove, a symbol of the Holy Spirit. It is based on the account of the baptism of our Lord. In those days Jesus came from Nazareth of Galilee and was baptized by John in the river Jordan.

“And when He came up out of the water, immediately the heavens opened and the Spirit descended upon Him like a dove.” [Mark 1:10]

INRI (window in north transept) stands for Jesus of Nazareth, King of the Jews.

The crossed keys (window in south transept - they also appear in the mural behind the left choir loft) refer to Peter’s confession and the power to forgive sins, vouchsafed to the church. Jesus said to Peter “I will give you the keys of the kingdom of heaven and whatever you bind on earth shall be bound in heaven and whatever you loose on earth shall be loosed in heaven.” [Matthew 16:19]

INRI stands for Jesus of Nazareth, King of the Jews. This symbol is in the balcony and also downstairs in the north transept.

The Cross and the Crown stand for the reward to those who are faithful to God during their lives. [Revelations 2:10]. The shape of these windows is in the design of a quatrefoil, a decorative feature often used in churches. It is a leaf having four foils or lobes and is symbolic of the four evangelists and Gospels.

The All Seeing Eye is a very stern symbol of God the Father. Its use began in the sixteenth century. It is a symbol of the power, majesty and omnipresence of God. “Behold, the Eye of the Lord is on those who fear him.”

The grapes signify the sacrament of Holy Communion. The sunburst behind the grapes suggests brotherhood is God’s purpose for mankind.

Both the “Holy Spirit Window” and the “Companion Window” in the South entrance convey their messages through religious symbolism. Doves, fire and flames are all Biblical images of the Holy Spirit. 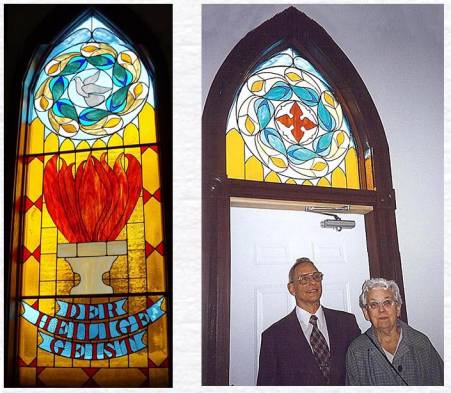 Top Panel: The Hovering Dove, the focal point of the inner circle of the Rosette, symbolizes the Holy Spirit which radiates in all directions. …and the Holy Spirit descended on him in bodily form like a dove. And a voice came from Heaven: “You are my Son, whom I love; with you I am well pleased.” [Mark 1:10, 11]

Entwining around the dove are two concentric circles of seven Mouchettes (a “tear drop” or modified “tear drop” figurette) each and with each Mouchette containing a Tongue of Flame.

The Inner circle of seven Mouchettes represents the seven gifts of the Holy Spirit as given in the Old Testament: Wisdom, Understanding, Piety, Counsel, Might, Knowledge, and Fear of the Lord. [Isaiah]

The Outer circle of seven Mouchettes represents the seven gifts of the Holy Spirit as given in the New Testament: Power, Wealth, Wisdom, Might, Honor, Glory, and Blessing. [Revelations]

The Hovering Dove also symbolizes the transference of God’s miraculous power to the Disciples at Pentecost, represented as “Tongues of flames” appearing on the heads of the Disciples signifying the presence of the Holy Spirit.

Center Panel: This panel contains a Baptismal Font of Fire. “I baptize you with water for repentance. But after me will come one who is more powerful than I, whose sandals I am not fit to carry. He will baptize you with the Holy Spirit and with Fire.”

The Flames of the Fire are nine in number, representing the nine fruits of the Holy Spirit: Love, Joy, Peace, Long Suffering, Faith, Gentleness, Goodness, Meekness, and Temperance. [Galations 5:22]

Bottom Panel: The name and theme of this window, “Der Heilige Geist” is written in German with honor and respect for and in memory of our hard-working German ancestors who bequeathed to us their heritage and this magnificent edifice.

The tails and wings of the Doves are cut so that the centermost image of the Rosette is that of the Cross. The Cross is made of the same glass as were the Flames in the other window, suggesting that the Doves are bearers of the Spirit’s Energizing Fire.

The Companion Window was dedicated on October 25, 1998 to the Glory of God in memory of Paul A. Lietz and in honor of Marjorie L. (Conradi) Lietz. (Picture above right shows Karl Mesloh & Marge Lietz).

Material contained in this article was provided by Karl Mesloh and Genevieve Conradi for the 175th Anniversary of St. Paul Church in June 2008 and appears on pages 70-72 of the 175-year Anniversary book. Also, colored brochures were printed and made available to the congregation and anyone else who was interested. [lmf-2008]