Symbols are used in the church for the purpose of sharing the elements of Christian faith, tradition and teaching by presenting to the eye an interesting and valuable supplement to the spoken or written word. In this manner the lines of our church and its furnishings are continually drawing the eye upward and forward and reminding us of God’s presence in our lives.

The steps leading up to the church signify the pathway or pilgrimage of the Christian who seeks to worship God and to learn His ways.

The Gothic architecture displays a pointed arch in the door frame which signifies aspiration and striving for growth in the spiritual life. The door may remind us of Jesus’ words, “I am the door”. The door is divided to make two entrances which represent the two natures of Christ, living and reigning. The large open doors welcome everyone to come into the church to learn and serve. The circle above the door has no beginning or ending and signifies the eternal nature of God. Within the circle is a cross, the symbol of Christianity.

The bell tower (or steeple) symbolizes God who is a “strong tower” to whom we can come for refuge and strength. The three small vertical windows in the tower direct the line of vision upward. The three bell windows represent the trinity. The bell calls us to worship and proclaims the priority of worship over work and play.

The spire on the tower (or steeple) points upward as a finger to admonish us, “Remember your God and his love, His will for you, and your duty to Him”, and as a reminder that Christ sits at the right hand of God the Father.

The cupola over the nave point has spires that point upwards. The spires are a silent witness to the true God whom the people come to worship in the church. The four small spires or pinnacles represent the four gospels.

A depiction of a scroll, like that used in Jesus’ day, is above both the north window and south window, on the outside of the nave, embedded in the brickwork. The church is on an east-west line to represent the “rising Sun of righteousness.” 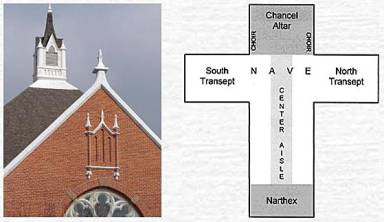 St. Paul Church is built in a cruciform or cross-shaped plan which embodies the Christian’s important symbol, the cross. The Narthex is the vestibule inside the east door. We leave our worldly thoughts there and prepare ourselves to enter the church. The Nave: The main body of the church between the narthex and the chancel is called the Nave. Nave comes from the Latin word navis meaning a ship of the Lord. The nave is where the congregation is seated during worship. Upon entering the Nave, there is an unobstructed approach to the altar in the center aisle and this represents the Christian way to God. It is the most important symbol in the church and signifies the spiritual presence in His church. 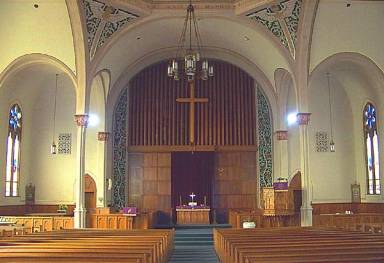 The baptismal font is located on the right side on the approach to the altar which signifies the ritual purification at the start of the journey.

The pillars are the chief support of the church and give silent witness to the apostles, prophets and other leaders of the church.

The central chandelier is circular and signifies the eternal existence of God. It has eight smaller lights around it representing the idea of regeneration. Seven days were occupied by God in creation and rest. The eighth day was significant of the “New Creation.”

The dome above the Nave has eight sides. The rounded massive form of this dome suggests authority and dependability. It reminds us of God’s wonderful creation of the heavens and earth and his protection which covers us. Note the four symbols of the four Evangelists: Matthew, Mark, Luke and John. It is sometimes said that these four figures signify humanity, royalty, sacrifice, and divinity.

Matthew gives us the genealogy of Christ in his Gospel. He points out the human side of Christ more than the other evangelists.

The lion is considered to be the king of the beasts. Mark, in his Gospel, emphasizes the kingly nature of Christ.

For an important or large sacrifice an ox was sometimes used rather than a lamb. Luke points out that Christ made a great sacrifice.

John in his Gospel seems to soar to great heights like that of an eagle. The eagle represents the grace of the Holy Spirit which was ever upon the Saviour.

Above the winged figures are the words: 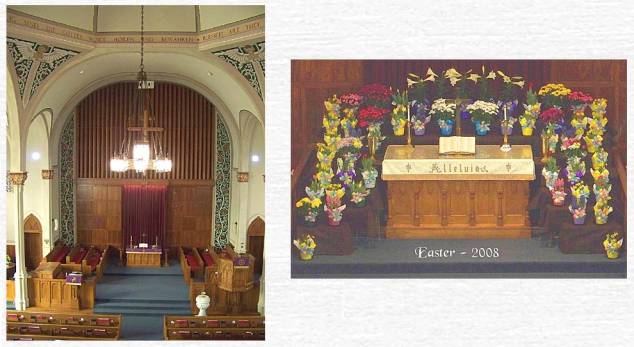 The altar and the cross are the center of the worshiper’s visual interest in the chancel. This reminds us of the crucified and glorified Lord as well as the thought of the priesthood of all true believers.

On the altar are two candles in candlesticks, one on either side of the cross. The candles are lit during worship service to signify that Christ is the light of the world. Two candles signify the divine and human nature of Christ.

The graded cross is on a base of three steps from which it gets its name. The three steps signify Faith, Hope and Love. The IHS in the center of the cross is a monogram of the name Jesus. It reminds us that God’s love for humanity is revealed in Jesus Christ on the cross.

On the altar is the missal stand which holds the Book of Worship. Altar flowers are symbolic of the beauty of God’s world in which we live and stand as memorial symbols of our departed loved ones who have entered eternal life through Jesus Christ.

Above the altar is the dossal or curtain. The dossal is used to heighten the effect of the altar. Looking above the altar, the cross of Christ stands as an everlasting sign of God’s suffering love and plan of redemption. 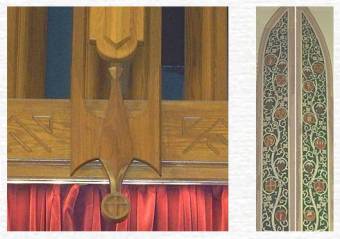 The descending dove with the tri-radiant nimbus is the symbol of the Holy Spirit. It is based on the account of the baptism of our Lord when the Holy Spirit descended. [Mark 1:10]

Above the altar and to the right is the Sanctuary Lamp. The sanctuary lamp originates from the Jewish tradition. Its Hebrew name is ner tamid which means eternal light and symbolizes God’s eternal presence. In Christian churches the light honors the presence of Christ in the church.

Behind each of the choir lofts, on the wall, is a mural with vines, branches and grapes. On the branches are symbols of the apostles. The mural is symbolic of the communion between Jesus Christ and the believers. The vines appear to be growing upwards toward God. It symbolizes Jesus’ words when he said to the disciples and to us “I am the vine, you are the branches…” [John 15:5]

Left mural starting at the base of the vine

The first apostle symbol is a saw shown in a vertical position with the handle above. This represents James, The Less, son of Aphaesus. James is also called “The Little” or “The Minor” because of his small stature. It is said that in the 96th year of his life he died a martyr’s death by being sawn in two.

The cross and spear symbolize St. Phillip and refer to his successful missionary journeys among the barbarians in upper Asia and Phrygia where he spread knowledge of Christianity and the Cross of Christ. The spear tells us of his martyrdom by being thrust through with a spear.

The fish refer to St. Andrew’s early profession as a fisherman. Today the symbol of the fish indicates being a Christian.

St. Matthias was the disciple chosen to take Judas’s place. The double-edged ax is an indication of his death. He was beheaded for his faith.

Right mural starting at the base of the vine

The shield of St. Thomas shows a vertical spear and a carpenter’s square. Thomas was a builder of churches and some say that he built a church in India. The spear refers to his death at the hands of a pagan priest.

Bartholomew, also known as Nathanael, is symbolized by three flaying knives. He won King Polymus of Armenia for Christianity but the king’s brother was so angry with Bartholomew that he had him flayed, crucified with his head downward and even beheaded.

The shield of St. Simon, the zealot, shows a fish lying on the book which signifies that he was successful in fishing for men through the Gospel.

The shield of St. John shows a chalice and a serpent symbolizing the story of an attempt to kill him by poisoning. The attempt failed when he made the sign of the cross over the chalice and the poison escaped in the form of a serpent.

St. James, the Greater, was one of the closest friends of Jesus. The three scallops refer to the long pilgrimages he made and are symbolic of baptizing people and bringing them into the Christian faith. 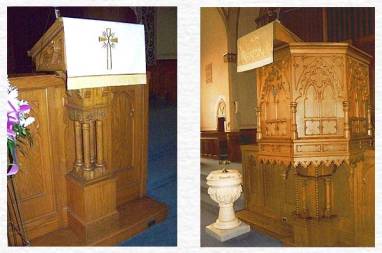 The lectern, with a base of four pillars, holds the Bible. The four pillars represent the four Gospels. The Gospels support the word of God.

The pulpit is used for the exposition and application of God’s Word. Four pillars support the pulpit. The eight sides symbolize the regenerating power of God’s Word, which is transmitted through the personality of the minister. Upon closer look at the various sides, the following designs and images are seen: quatrefoil, two small arches in one large arch which represents the Trinity, dove wings, and nine scallops representing the nine fruits of the Holy Spirit: Love, Joy, Peace, Long Suffering, Gentleness, Goodness, Faith, Meekness, and Temperance.

Material contained in this article was gathered by the book committee for the 175th Anniversary of St. Paul Church in June 2008 and appears on pages 64-69 of the 175-year Anniversary book. Also, colored brochures were printed and made available to the congregation and anyone else who was interested. [lmf-2008]