The old Lehmkuhl Hotel, a 2 and 3 story building, (originally the Behrens Hotel, owned by John B. Behrens), it fronted on North Main Street & was the first 3-story structure to be erected “probably 100 years ago”. 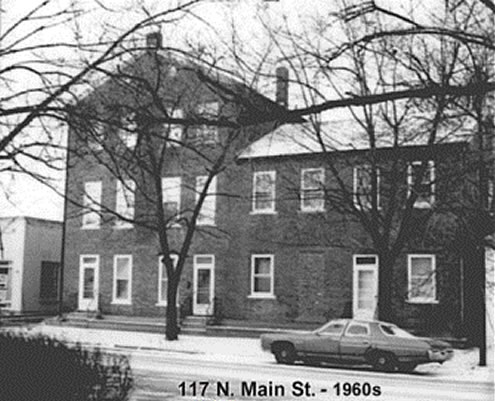 According to Adam Helwig, the Lehmkuhl Hotel was originally an old frame building, and was later replaced by a brick building. According to the Ohio Historic Inventory, the 2-story part was erected in 1846 and the 3-story addition was built in 1858.

This was really an old-time hostelry erected by the father of the late Cort and Carl Lehmkuhl - J. Albert Lehmkuhl. It was a favorite stopping place for farmers, who engaged in butchering hogs in the wintertime from December 1st to February 1st and hauled and slaughtered porkers from as far west as Fort Wayne, Indiana via horse-drawn wagons. If the roads were covered with a solid bed of snow, bobsleds were brought into service.

The Lehmkuhl house was their favorite stopping place for many years. Mr. & Mrs. Lehmkuhl were the parents of a bevy of girls who assisted their parents in conducting the business on a successful scale. The Lehmkuhl family was ideal in extending hospitality to their patrons and thus prospered for 24 years.

Esther (Fearing) Quist related that “My great-grandfather, Albert Lehmkuhl, built that 3-story brick building. It was an inn and travelers came for miles around and lodged there. All of my mother’s sisters and brothers (children of Cort Lehmkuhl) were born there and my mother, Adelia (Lehmkuhl) Fearing, lived there until she was 16 years old (1884). Behind the house stood a large outdoor bake-oven where bread was baked and eggs were boiled by the bucketful! My great-grandmother pieced and quilted quilts on that 3rd floor many years ago.”

Fernando W. Bruns’s mother, Magdalene (Buckloh) Bruns, was employed by the Lehmkuhls during her girlhood days (1860s?) as a dining room waitress.

The dining room (a long room with the kitchen in the rear) was located in the center of this structure, adjoined by a lager beer saloon in the south 1/3 of the building. The north section served as sleeping quarters for overnight patrons, as did also the entire 2nd story of the building. After the Lehmkuhls discontinued the saloon business, the room was occupied by Herman Meyer, who conducted the place for several years and later let the 3rd story for dances and other entertainment. The center portion is now (1947) rented by Mr. & Mrs. John Schierholt for living quarters.

In the 3rd story, on the south (left) side of the building, was the meeting place of New Bremen’s Masonic fraternity. The Lodge prospered quite a few years (see “The Towpath”– July 1999).

The Inman family – Albert G., wife Ollie, and children Carl & Joyce took title to this landmark from William Barth’s son, Edwin C. Barth, on August 5, 1946. In 1967, the Inmans sold the apartments to Jim & Lucille Scheer, who in turn sold them to the First National Bank in 1980. 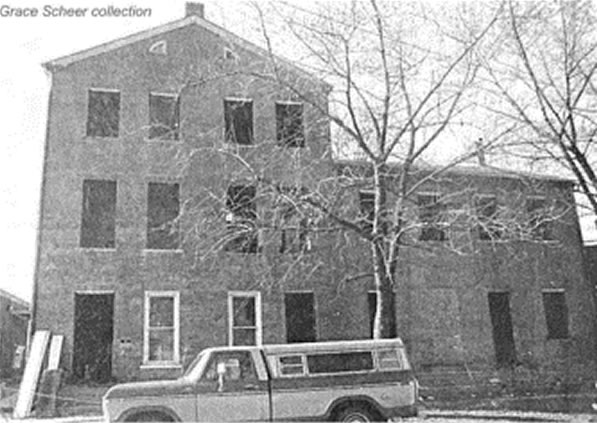 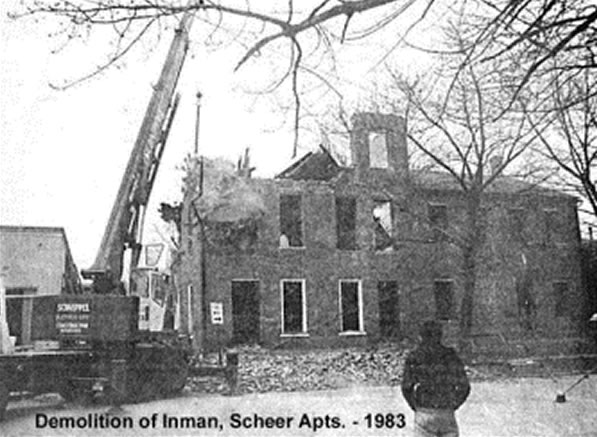