In 1848, Auglaize County was established from parcels of Allen, Mercer, Shelby, Darke and Van Wert Counties and Wapakoneta was established as the county seat. The first building to be used as a courthouse was one owned by John H. Nichols which was rented for $60 per year.

On July 2, 1893, excavation began for the new 3-level courthouse on a city block bounded by Willipie, Pearl, Perry and Mechanic Streets. The total cost, including all fees, furnishings, power plant, landscaping and sidewalks totaled $259,481 - an extravagant amount for that time.

County commissioners and other local officials took possession of the building in December 1894.

On July 7, 1994, in honor of the 100th anniversary of the courthouse, a community celebration was held. It was entitled Moonwalk ’94 to honor the 25th anniversary of Wapakoneta native Neil Armstrong’s historic July 20, 1969 walk on the moon. [lmf] 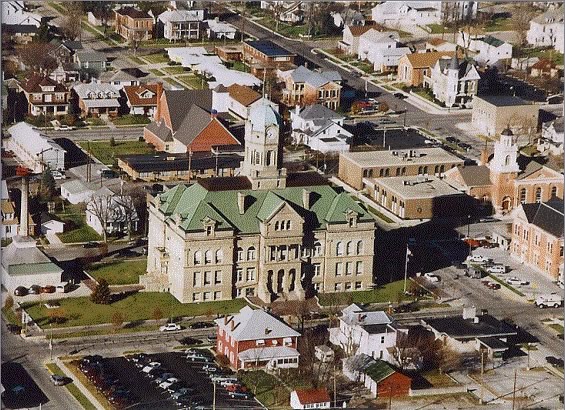 Aerial view of Auglaize County Courthouse - 1994
100th Anniversary
Photo by Gary Katterheinrich
Gary Katterheinrich retired in August 2007 as Manager of the Neil Armstrong Airport in New Knoxville, Ohio. He had served for 29 years.