The Towpath in October 2018 (page 10,11) contained an article researched from The New Bremen Sun on the effects of the Influenza Pandemic in New Bremen. Little did we know then all the comparisons we have to the present-day pandemic.

The First World War ended on November 11, 1918 but the influenza pandemic did not. In New Bremen there was a fresh
outbreak of the flu reported in the SUN December 6th issue. Dr. Stappe, Health Officer, put restrictions to control the disease
back in place. Schools and churches were ordered closed until further notice.

All businesses were closed at 6 o’clock each evening. Children also had a 6 o’clock curfew. New Bremen Village
Council advised Dr. Stappe to meet with Dr. Ekermeyer and Dr. Fledderjohann to devise ways and means to combat the
epidemic.

Dr. Stappe furnished the SUN office with rules and regulations for dealing with flu. It was believed that the methods were effective, both as preventives and as germ destroyers. (New Bremen Sun 12-6-1918) 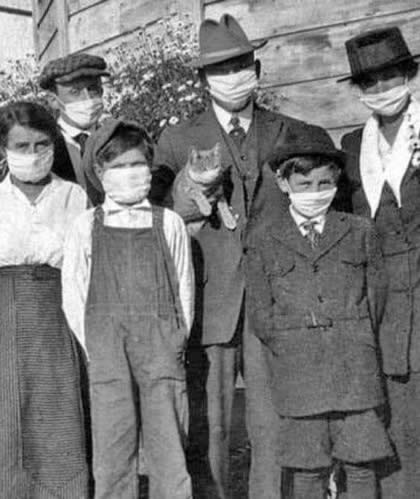 It is very important that the very first case of influenza in a family should have immediate medical attention.
In no instance is one exercising prudence in waiting until another member of the family is taken down. Physicians often notice that this is a mistake so many people make.

To gargle the throat with salt water, by dissolving a teaspoonful of salt with a pint of water and using this
three or four times a day, has been found as a very effective preventive. Snuffing the brine is also considered a good remedy

One should never enter the sick room unless the attendance is absolutely necessary. Visitors should not
be allowed, nor should members of a stricken family go visiting.

The wearing of a gauze mask upon entering the sick room is all important. It has been tested right here in
New Bremen that attendants of influenza patients wearing a gauze mask remained immune from the disease. When once brought into use, should be changed often with other masks that have been previously boiled.

Parents are warned to keep their children at home during the present quarantine.

If the above regulations are strictly adhered to, there is every reason to believe that further spread of the disease will be effectively controlled.

Each week the SUN carried a report titled the Flu Situation. In the December 13th issue, Dr. Stappe reported 53 cases of flu in town and 10 cases in the township. The closing regulations remained in force. On December 27th the Flu Situation was reported as greatly modified and most restrictions were lifted. However, the public was admonished to practice every precaution to avoid another outbreak of the scourge.

By the first week of 1919 the Flu Situation reported conditions have improved and authorities have seen fit to lift the ban completely. New Bremen was able to slow the outbreak of influenza and return to normal.

Members... click below to read this article as well as the full version of the January 2021 Towpath. If you still don't have your user name and password for access, email us at info@newbremenhistory.org.