"In 1967, restoration of the locks and canal in New Bremen was started. At the request of New Bremen citizens and the New Bremen Village Council, legislation was introduced by Robert Wilhelm, State Representative, who asked that the canal lands be ceded to the village for purposes of creating a park and recreation area for beautification of Ohio's historic canal site and for other public and municipal purposes." ("New Bremen's History at a Turning Point" - Evening Leader - 5/10/1967). On June 13, 1967, House Bill 525 was signed by Governor James Rhodes.

In 1995, the New Bremen Tree Commission was established and that fall undertook as its first project the planting of trees along a two block section of South Main Street. The next project to be undertaken was the establishment of "Lock One Park" in the block containing the historic Miami-Erie Canal lock (Lock One) and the New Bremen Public Library, along South Washington Street.On March 17, 1997, work was begun in the area formerly occupied by the Garden Club's raised circular flower bed and fountain (across from Wint’s Restaurant).

One of the main features of the Lock One Park will be "Memorial" brick walkways - around the new circular flower bed (Phase I, scheduled for completion by June 1, 1997), through the park following the diagonal lines of the canal, and a four-foot brick walkway around the Library. In July, 1996, the Commission started taking orders for the "Commemorative" bricks. The bricks cost $50.00 each and may be inscribed with two or three lines. Each line is to contain no more than 14 characters, and the third line will cost an extra $1.50. The public was encouraged to take part in this project to recognize their German heritage. (“The Towpath” – April 1997)

The initial phases of New Bremen's two new tourist attractions were both completed in July, 1997 - the "Lock One Park" south of Monroe Street, between South Washington St. and the Miami-Erie Canal - also the "Bicycle Museum of America" at 7 West Monroe St., adjacent to Lock One Park.

One of the two main features of Lock One Park are the brick walkways containing nearly 33,000 bricks, over 600 of which have been engraved with the names of the purchasers or names designated by them.

Completing Phase I of the park were trees, shrubs, and sod, which created an instant "green space" for all to enjoy this summer. There are also benches where visitors can sit and visit. 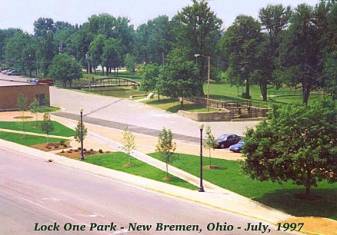 In the picture on the left above Lock One can be seen at the right, a historical canal monument, Loramie Summit, in the center, and the Morrison "bowstring girder" foot bridge, installed in 1984-1985, in the distance. 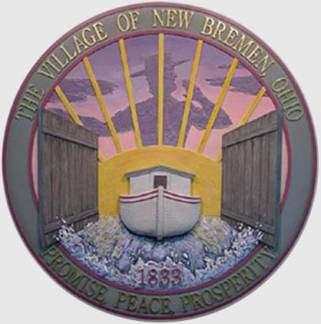 New Bremen received a new village seal which was unveiled on August 15, 1997 during the opening ceremonies of the 23rd annual Bremenfest. It now hangs in the municipal building on North Washington Street. The seal was designed by Dan Keyes of 15 North Walnut Street and features the Miami-Erie Canal as its central theme.

The bas-relief pastel-colored four-foot diameter seal portrays the opened gates of the canal lock with a boat coming through and the water gushing out. Behind this are the rays of the rising sun and the silhouette of a man with his left hand cupped to his mouth as if he is beckoning to others - his right arm on the canal gate as if to hold it open. The water is splashing up at the bottom of the seal and the date of 1833 (the date of New Bremen's founding) is in the center. At the top of the seal is "The Village of New Bremen, Ohio." The seal's motto, "Promise, Peace, Prosperity", is at the bottom. 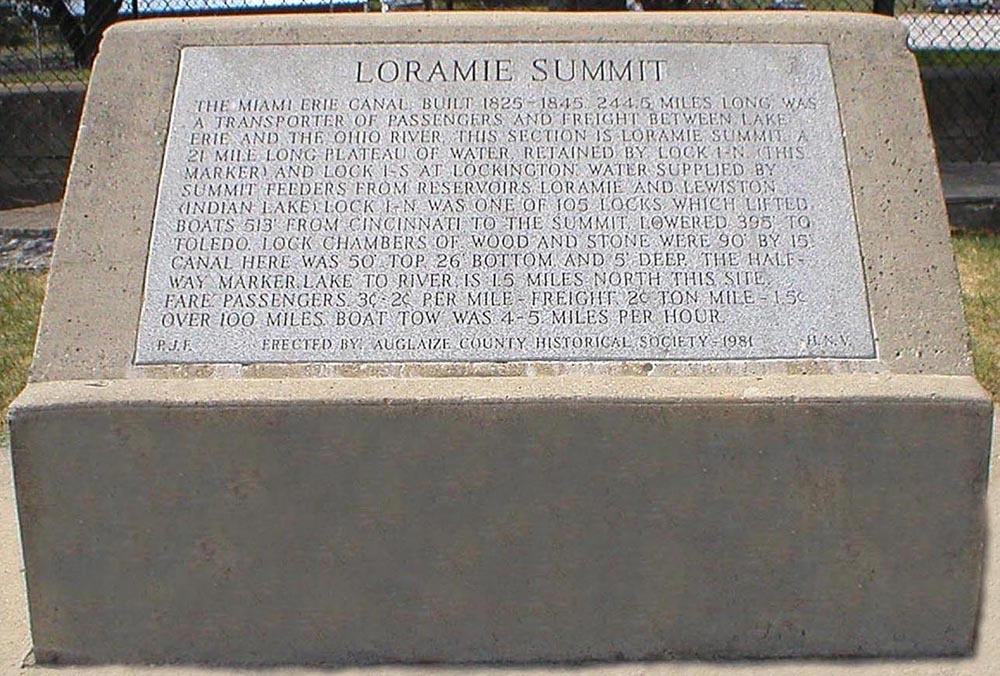 On Friday, July 15, 2005, an exploratory excavation was done on the east side of the canal at Lock One to gain information on the construction methods used when the concrete lock was built in 1910.

The original lock, built about 1845, was constructed of massive wood timbers with extensive wood foundation and bracing. The replacement in 1910 was built of concrete which was relatively new at that time.

Several 12” wood timbers of the original lock were located buried in the blue clay and were identified as the foundation and bracing of the original structure. These timbers are to be cleaned and restored and eventually are to find a home at our museum.

More recently, in October and November 2005, the original concrete spillway east of the lock, that controlled the water elevation, was located and appeared to be in very good condition, complete with its cast-iron wicket (gate) still in its original location. This is located about 12” below the Lock One parking lot. The footers, buried 15’ below ground level, also seem to be in good condition.

In September 2004, the Village of New Bremen received a $280,000 grant from the state of Ohio for the preservation project. The Village is responsible for another $70,000.

On Monday, June 26, 2006 at 12:00 noon, the project of restoring Lock One North on the Miami-Erie Canal to its 1910 appearance was begun. A “Gate Opening” ceremony, the first step of draining the canal in preparation for the reconstruction, was held at Lock One at the southwest corner of Washington & Monroe Streets. The draining of the canal was to take 2 days, any fish left in the shallow water to be removed to another location.

While the canal is drained, Saintignon Excavation will dredge the canal of the 2½ feet of silt and sediment, and the eroded canal banks will be built back up to canal standards. This will initially be done between Lock One and Plum Street, but could be continued southward. Trucking, stone and clay for this project will cost an estimated $30,000. The canal was last dredged in the late 1970s.

The contractor for the restoration, Jutte Excavating of Fort Recovery, expects the heavy excavation and concrete work to be completed by the end of August.

Wooden gates matching the originals are to be made by Hoge Lumber Co. of New Knoxville. A bypass to handle excess water will be constructed around the east side of the locks, similar to the 1910 arrangement. A re-created spillway will empty into a 50’x60’ basin at the north end of the lock. This will be a smaller version of the original basin that served Kuenzel Mills, etc. Work on the gates and other details will continue into the fall. Additional parking spaces and landscaping work are planned for the spring of 2007. This will complete the project.

Total cost of the project is expected to be $841,000. A grant secured in September 2004 from the Ohio Dept. of Transportation (ODOT) will cover $280,000 of the costs with the New Bremen Historic Association providing an additional $70,000 per the grant’s requirements. The balance will be paid by the Village of New Bremen.

Bremenfest, normally held in Lock One Park the third weekend of August, will be moved south of the construction site this year closer to Plum St. (“The Towpath” – July 2006)

Council President Don Kuck presenting the wheel to NBHA Curator, Delores Stienecker, to be displayed in our museum’s canal exhibit.

Work is well underway on the Lock One rebuilding project. New concrete walls, reinforced with steel bars, have been poured. Original-type gates are still to be installed at both ends of the project, with the south gates being operable and the north ones being permanently fixed shut. Excess water will be routed in a bypass on the east side of the locks and will then go over the spillway into a yet-to-be constructed basin. The spillway and basin are being built on a smaller scale than the originals. Heavy construction is to be completed by Thanksgiving 2006. The parking lot and the landscaping will be done next spring.

After the canal was drained, the canal banks were to be rebuilt using compacted clay. Large stone was later placed above and below the water line to keep muskrats from ruining the newly restored banks.

Several sections of the old concrete wall were saved from the northwest wing wall where the towropes had worn 2-3” deep into the concrete.

In August, in an area of the canal near the JayCee Park (near Cherry Street), remnants of an old sunken canal boat were found by using a backhoe to scrape away the dirt and muck. Found were the keel where the rudder was attached (about 3 feet long), some hand-forged nails, and pieces of the bottom of the boat (about 6 feet long).

In some of his many reminiscing articles, historian Ralph May recounted how he used to swim at “the old swimming hole” south of the ice-house “a little beyond where the hedge started and almost opposite where the ‘Old Boat’ stuck out of the water”. Other living local residents also recalled having played on the sunken ship in their youth, which is why the search was conducted.

According to current stories being circulated, the boat caught fire and was pushed to the side of the canal to let it burn out, probably toward the end of the canal era, after which it was left in place.

With the recent rains we’ve had, Lock I and the Miami-Erie Canal in New Bremen have filled with water (between Monroe St. & Plum St.) and again look like they used to, only better (see pictures above).

Reconstruction of Lock I began in July 2006 after the New Bremen Historic Association was able to raise their quota of $70,000 in matching funds as required when applying for a grant from the Transportation Enhancement Program through the Ohio Dept. of Transportation.

Jutte Excavating Inc. of Fort Recovery worked hard to maintain the original 1910 arrangement of the lock, including the replication of random-form boards on the concrete walls of the lock (see picture #1). This was a condition of the grant the village received from the Transportation Enhancement Program. Jutte also made suggestions that would add to the longevity and resilience of the lock.

The four white oak gates, manufactured by Hoge Lumber Co. of New Knoxville between January and April 2007, measure 14 feet high and weigh nearly 5000# each. The square white oak arm beams, designed to open and close the gates, measure 14” in diameter x 22’ long and weigh about 2000# each.

Saintignon Excavating Co. of Celina was contracted to dredge the canal south of Lock I up to Plum St. Rip rap and #2 stone were later placed on the banks to reduce the bank erosion (see picture #4). Additional cleanup work is planned on the north end of the canal near the ABC Learning Center on First St.

The 1864 Morrison cast-iron “bowstring” footbridge which was installed across the canal in 1984-85 at the west end of Front Street has recently been repainted – twice! By some fluke, it was allowed to be painted red the first time. When Joe Eilerman, who was on the original committee for the bridge’s installation, pointed out that the red color did not fit within most state historical codes, council members voted that the bridge should be painted again – this time the appropriate original historical color of black, and should remain black from here on.

New Bremen’s Village Administrator, Wayne York, and Kevin Koesters of Mote & Associates, Inc. of Greenville, the engineer of the reconstruction project, worked closely with the Toledo Metro Parks officials who restored Lock 44 in Grand Rapids, Ohio to ensure the historical correctness of Lock I North in New Bremen.